noun. the exhilarating tradition of Boilermakers widely popular at the conclusion of final exams and graduation

About the Author Mark Choi 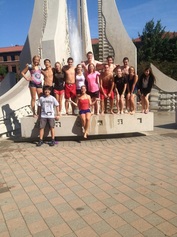 Fountain runs have long been a tradition at Purdue since the installment of the Engineering Fountain in 1989. Students, faculty and alumni all participate in running through the five beautiful fountains as it is known to be part of the Boilermaker Experience. From the beginning of their freshmen year, Boilermakers are exposed to the tradition through Boiler Gold Rush, an orientation program for new students. On the right is a picture of my Boiler Gold Rush group after running through all five fountains. Fountain runs also serve as a symbol of hope for some students during dead week and exams. Andy Han, a sophomore at Purdue, went on a fountain run with his friends after their final exams last year and said "Its something exciting to look forward to while your head is being crammed with a semesters worth of notes."

Discover the 5 Fountains at Purdue

The Engineering Fountain Controversy of 2000 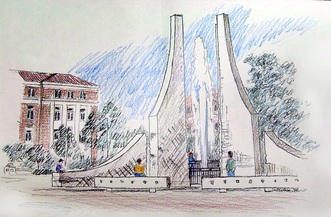 A sketch of the plan to fence the Engineering Fountain in 2000
Accidents from fountain runs lead to emergency room visits
Although fountain runs are safe and fun for the whole family, they have not always been that way. From 1993 to 1999, there had been seven accidents related to students running through the fountains. One emergency room visit involved a young girl breaking her arm after the force of the water shooting out of the ground lifted her in the air.
This prompted the University to reexamine the fountain and its safety hazards. In 2000, the University Architecture Landscape Planning Committee's plan of action to eliminate the possibility of incidents was to erect fences around the Engineering Fountain (see photo to the left).

Fence the Fountains?
The news of this plan brought back opposition from the students and faculty. One student argued that the fences will not keep anyone out because everyone would just hop them. Graham Cooks, a professor in the chemistry department, brought up an interesting point about how closing off the fountains would be a symbol of a closed frame of mind from the university and could discourage prospective employees from choosing to work at Purdue. He said that "It creates an atmosphere that is not open and perceptive."
Cooks led the petition opposing putting fences around the fountains. He stood outside with a couple students holding up a sign that asks the question, "Fence the Fountains?" The result of the petition was completely one sided with 730 students opposed and 7 students for.

A New Proposal
Due to the overwhelming majority that opposed fencing, the advisory committee proposed a $10,000 solution in June of 2000 and it included installing a safety cylinder inside the center of the Purdue Engineering Fountain. Instead of the water shooting from the ground, it would shoot out of a 10 foot 6 inch tall metal cylinder. The Purdue Administration approved the proposal based on several factors including safety, aesthetic appeal, cost benefit and the degree of public support This solution was widely accepted by the community and plans for construction of the metal cylinder began. The final design showed the cylinder with a mirror finish to give students a reflection of the Purdue Mall.

Construction Begins
Construction started in 2001 and the goal of the project was to take away the possibility of injury from the force of the water. The fountain reopened on Sept. 14, 2001 and people were free to run in it again. From 2002- 2004, there were still 4 accidents involving the fountain but they were less severe and not a cause of the actual fountain but of people colliding with one another.

Tradition lives on
Today, the Engineering Fountain pumps 588 gallons of water per minute into the air with colorful glowing lights turned on in the evenings. Boilermakers look forward to running through fountains on warm days after class, after finals, and one day, after graduation.

You never outgrow being a Boilermaker.

Got Questions? Send me an email at choi278@purdue.edu!