Looking for things to do before you graduate? Breakfast Club is Purdue's unique, unofficial tradition that a student must do before graduation. This tradition can be found during the football season. Students and alumni in costumes gather at bars near campus early Saturday morning on home football game day and get drunk. Be aware that you must be older than 21 to drink! Breakfast Club takes place during Grand Prix in April, as well. Breakfast Club provides a great opportunity to socialize with other Boilermakers while expressing one's unique characteristic and interest by wearing costumes. You will get more cheers if you dress up more creatively!

Self Quiz: Should you participate in Breakfast Club? 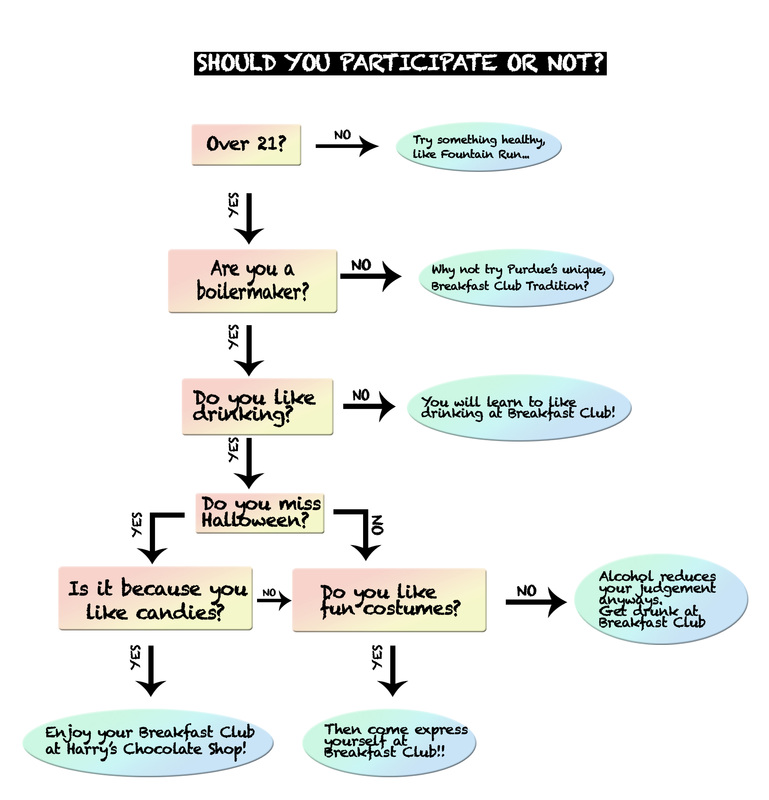 Drinking is fun, but often comes along with problems. Every morning on Purdue football game days, students and alumni line up outside bars near campus. They dress up in costumes and drink. It has become a problem to manage crowds and drunkenness because Breakfast Club is very popular among students. Instead of banning this early-morning drinking tradition, local community tries to monitor the situation to prevent serious problems. Police look for dangerous situations rather than ride every drunken people to the jail.

Breakfast Club reflects the seriousness of drinking problems at college. Students often ignore traffic signs and litter on the streets throughout the Breakfast Club party. According to a local residence, Dorothy Taylor, she is now used to noises and crowds, but she does not like that her yards and trees are often damaged because of drunken people.

The University and the city of West Lafayette says that they are going to “kill Breakfast Club.” Mostly, Purdue is concerned about the University’s image because they think Breakfast Club is “early morning breakfast parties with alcohol.” The City thinks it needs to be restricted in some ways for the safety. It would be a real tragic if a tradition like Breakfast Club disappeared. Thus, students participating in Breakfast Club must be aware of dangerousness of excessive drinking and take responsibility of their own actions in order to preserve Purdue's one of the most interesting traditions.
This page was edited by Juhee Lee.